Despite state efforts to shut us down, Golos will keep mapping all election violations in support of the Russian people 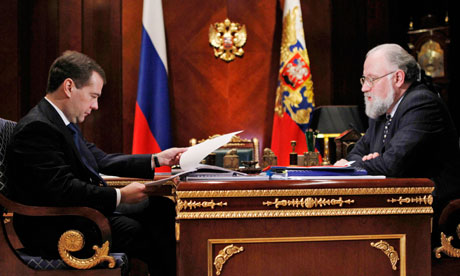 Having worked for Golos, Russia's only independent election monitoring organisation, for more than eight years, I never dreamed the president's administration would engage in an open campaign against our organisation – especially in the week running up to the country's Duma elections last Sunday.

Since September, in collaboration with Gazeta online newspaper, Golos had been running an online crowdsourced project known as Karta Narusheniy (mapped election violations). This proved hugely popular among Russian internet users: we were flooded with video clips and photographic evidence of various election-related violations.

By 25 November, Karta had become one of the 20 most popular websites on Runet (Russian internet) – along with the state Duma's website and the Russian president Dmitry Medvedev's "Big Government". It was a thorn in the authorities' side; its multiple recorded and mapped reports of alleged violations were a huge blotch on the government's rosy picture of these "fair elections".

All the same, in the week before the Russian elections, most people here were feeling very pessimistic. The president's administration had openly interfered in the electoral process: public servants, students and factory workers were forced in their masses to apply for absentee ballots and vote in a certain way at certain polling stations.

The authorities virtually monopolised the media to lend support to the United Russia party, while other parties were prevented from legally promoting themselves. Advertising firms and media outlets not aligned with the state were put under pressure. We know that crowds were recruited to participate in one of the most popular vote-rigging methods: multiple "cruise" voting.

As election day approached, we learned that three incumbent Duma deputies had filed a complaint to the general prosecutor's office, accusing Golos of sabotaging the elections. Then, last Thursday, our office was raided by officials from the general prosecutor's office, who accused us of illegally publishing some sociological finding on our website. We were summoned to appear in court the next day – they were clearly in a hurry to shut us down. The case against us included a letter from the central elections committee's chairman, Vladimir Churov, accusing Golos of "attempting to usurp powers of authority".

During the trial, the judge never asked a single question related to the matter, while the prosecutor failed to produce any proof of us actually posting unlawful materials on our website. There were numerous journalists present at the trial and many struggled not to burst out laughing, as it wasn't quite clear what we were being accused of. The judge sentenced us to a fine of 30,000 roubles (£615) – however the sentence hasn't been enforced yet, and we are going to contest it.

Finally our chairman, returning from a Russia-EU civil rights forum in Warsaw, was held at customs for 12 hours. She was searched and interrogated, and had her laptop seized. Clearly there had been a directive to prevent our centralised accumulation of election violation allegations from across the country.

And there was no shortage of these. The vote rigging was so blatant that on the day of the elections, 4 December, we were simply flooded by allegations. The scope of the rigging was astonishing: throughout the day, numerous accounts of multiple voting emerged, with voters travelling from station to station with absentee ballots, casting several times in a row. Count procedures were reported to have been violated, with observers refused access to verify the count protocols and members of the press forcibly ejected.

But despite the numerous violations, the Russian people's commitment to these elections was astonishing. Those who previously would have hardly bothered to vote at all became fully fledged citizens, aware of their rights. It doesn't really matter at this point which party won: the true winners are the voters themselves, whose power will only grow from now on. And though we are worried about further investigations against Golos, we are fully committed to mapping all the election violations. This is vital to understand the scope of what's happening, to help people voice their concerns. The vote forgers will not go unpunished.

Send to a friend

Top stories in this section