Preference falsification, according to the economist Timur Kuran, is the act of misrepresenting one's wants under perceived social pressures. It happens frequently in everyday life, such as when we tell the host of a dinner party that we are enjoying the food when we actually find it bland. In Private Truths, Public Lies Kuran argues convincingly that the phenomenon not only is ubiquitous but has huge social and political consequences. Drawing on diverse intellectual traditions, including those rooted in economics, psychology, sociology, and political science, Kuran provides a unified theory of how preference falsification shapes collective decisions, orients structural change, sustains social stability, distorts human knowledge, and conceals political possibilities.

A common effect of preference falsification is the preservation of widely disliked structures. Another is the conferment of an aura of stability on structures vulnerable to sudden collapse. When the support of a policy, tradition, or regime is largely contrived, a minor event may activate a bandwagon that generates massive yet unanticipated change.

Private Truths, Public Lies uses its theoretical argument to illuminate an array of puzzling social phenomena. They include the unexpected fall of communism, the paucity, until recently, of open opposition to affirmative action in the United States, and the durability of the beliefs that have sustained India's caste system.

How can societies experience such dramatic reversals [as the end of apartheid in South Africa, widespread smoking bans and Republican control of Congress] in such short periods? In his inventive and sometimes astonishing book, Timur Kuran offers an answer--one that bears not just on revolutionary movements, but also on feminism, conformity, cognitive dissonance, the moral majority, 'outing' homosexuals, rationality, hate speech codes, Gorbachev, hippies and the caste system (all of which make prominent appearances in these pages)...Much of the interest of Kuran's book is owed to his insistence, unusual and refreshing among economists (of whom he is one), that people's choices, and even their desires, are not given and fixed, but are a function of social and psychological conditions, above all pressures imposed by other people...Kuran's book is a terrific success.
--Cass R. Sunstein (New Republic )

A splendid book. It tackles a long list of interesting and important questions that have been discussed at length, and largely unsuccessfully, by scholars from each of the social sciences. The narrow rational choice model simply cannot answer many of these questions. Psychological theories by themselves cannot even address many of them. And sociological theories that take the group as the unit of analysis have made little progress. Kuran patiently and intelligently blends the insights of these disciplines into a behavioral model that moves the discussion forward on many fronts.
--Robert H. Frank (Journal of Economic Literature )

From the caste system of India, to communism's rise and fall, to the continuing controversy over affirmative action, Timur Kuran's new theory of social evolution is as provocative as it is ambitious. Merging insights from many disciplines, Private Truths, Public Lies seeks to show how 'preference falsification' shapes social action, biases knowledge, inhibits change, and (from time to time) unleashes revolution...An excellent book that can be read by scholars of all disciplines. Its interdisciplinary insights illuminate a raft of social, political, and economic phenomena.
--Laurence R. Iannaccone (Journal of Economic History )

Economist Timur Kuran has written a fascinating study of how even formally 'free' citizens can be socially pressured into 'living a lie,' publicly justifying beliefs and practices that they privately reject, even abhor.
--Frederick R. Lynch (National Review )

The core idea of this stimulating book is simple to grasp: Social factors, the nature of which is variable with the circumstances, can have the effect that people falsify their private preferences when they have to express them publicly.
--Raymond Boudon (Contemporary Sociology )

[Kuran's] arguments are elegantly made and the lengthy discussions of the applications of the basic ideas are well researched and suffiently detailed to be of considerable interest in their own right...This is a thoughtful, imaginative, and stimulating book which deserves a wide audience.
--Alan Hamlin (Economic Journal )

Timur Kuran takes us on a grand journey through world history, from the creation of the Indian caste system to present-day racial quotas in the United States. The journey is guided by the search for the social consequences of a phenomenon that Kuran argues is all-pervasive: preference falsification...Kuran's book opens important new perspectives for the analysis of both individual choice and social change.
--Felix Oberholzer-Gee (Journal of Institutional and Theoretical Economics (Tübingen, Germany) )

Few recent contributions to the literature of social science open so many windows. This engagingly written book carries its learning and sophistication lightly.
--Loren E. Lomasky (Independent Review: A Journal of Political Economy )

A fascinating study in social and political psychology and public opinion...For those who stress that war, violence and peace start in the minds of men, this is certainly an important work.
--Gernot Kohler (Peace Research )

A compelling theoretical analysis of how contextual structures of power influence an individual to conform to public sentiment. Combining perspectives of economics, psychology, and sociology, the author provides countless insights into the process whereby individuals repress their true opinions because of possible censure or admonition from those representing the prevailing sentiment...Kuran's argument has crucial implications for social theory...Highly recommended for its thorough and insightful analysis. (Choice )

[E]normously subtle...[Kuran's] exposition of 'preference falsification' is the most original work of social science I have read for many a long year. The term and concept have innumerable applications and deserve to enter the language...The conclusion Kuran reaches is a powerful one which is at odds with most social science and indeed everyday thought about our ability to understand or forecast social change...The text is entirely lucid and the theme is of the utmost importance.
--Eric Jones (Quadrant (Australian Review of Ideas) )

Kuran argues that agents choose 'public preferences' which are contrary to their 'private preferences' in order to attain 'reputational utility.' Such 'preference falsification' pushes, in turn, ideas away from private consciousness, originating 'knowledge falsification' (i.e., indoctrination). Kuran's book is well-argued, never dull, and studded with diverse anecdotes. It is destined to become a classic, providing a methodological individualistic alternative to Karl Marx's theory of ideology...Academics as well as educated persons will come back after reading the book more enriched on how to understand our complex world.
--Elias L. Khalil (Southern Economic Journal )

Kuran is the leading pioneer in examining the harsh and the subtle ways in which we are induced to deceive our public, our acquaintances, and eventyally ourselves about the issues that matter most in our lives or in our careers. His insight is always persuasive, sometimes stunning. A very careful book.
--Thomas C. Schelling, University of Maryland at College Park

This fascinating book analyzes a topic almost never considered by economists, how social pressures modify choices among publicly visible actions. In particular, expressed "public opinion" may be unrepresentative of actual private beliefs, so a minor shock can easily set a bandwagon in motion. Thus political and social equilibria are far more fragile than is usually believed. In fact, almost all great revolutions have been more or less total surprises. The author's applications of the model--to the caste system in India, to the downfall of communism, and (unexpectedly!) to the affirmative action juggernaut in the United States--are gripping, insightful, and (with regard to the last issue) courageous.
--Jack Hirshleifer, University of California, Los Angeles

Timur Kuran explores the devastating consequences to political discourses that derive from the simple unwillingness of intelligent individuals to say publicly what they believe privately. The United States may have constitutional guarantees for freedom of speech that were nowhere to be found in communist societies. But the eerie parallels that Kuran draws between the persistence of communism in Eastern Europe and the persistence of affirmative action at home should give even skeptical readers pause about the ability of our legal institutions to promote candid discussion of the major political issues of our times.
--Richard A. Epstein, University of Chicago

Kuran is the leading pioneer in examining the harsh and the subtle ways in which we are induced to deceive our public, our acquaintances, and eventyally ourselves about the issues that matter most in our lives or in our careers. His insight is always persuasive, sometimes stunning. A very careful book. (Thomas C. Schelling, University of Maryland at College Park ) --This text refers to an out of print or unavailable edition of this title.
See all Editorial Reviews

More About the Author

4.3 out of 5 stars
(3)
4.3 out of 5 stars
5 star
1
4 star
2
3 star
0
2 star
0
1 star
0
See all 3 customer reviews
Share your thoughts with other customers
Write a customer review
Most Helpful Customer Reviews
18 of 18 people found the following review helpful
4.0 out of 5 stars Why people lie in groups. Strikingly original theory. January 28, 1997
By A Customer
Format:Hardcover
Economists, sociologists and psychologists each base their models on underlying conceptions of man: Homo economicus is the bloodless and instantaneous calculator of costs and benefits; homo sociologicus is a product of social stimuli; and homo psychologicus is ruled by conscience.

Kuran has done something quite novel in this non-fiction book- he has melded all three theories into one, and uses it to explain why people often times mask their true opinions in groups.

This is remarkable feat given the relative lack of cross-pollination across these three disciplines. The theory is intuitively easy to grab, yet one yearns for examples which directly connect to his theory. I spent a long time trying to understand what was meant by "intrinsic utility" since it was defined in different ways in different parts of the book.

The chapters are meant to buttress his theory by tackling such issues as revolution, affirmative action, and slavery, but they are not especially well integrated into the first part of the book. In fact, they read more like stand alone articles.

The book is original and thought provoking. There is no other book like it. Those who are not trained in economics will find plenty to talk and mull over in the later chapters. But Kuran could do a better job of explaining the early section with more illustrations.
Hopefully, he will address these concerns in a later edition.
Comment |
Was this review helpful to you?
Yes
No
4 of 4 people found the following review helpful
4.0 out of 5 stars Clear thinking about issues that many avoid thinking about September 23, 2004
By Peter McCluskey
Format:Paperback
This book does a good job of analyzing the causes and effects of the differences between public and private beliefs, although it is a bit slow and long-winded.

Much of what the book says seems like it ought to be obvious, but for the most part I hadn't thought very clearly about these issues, and at very least the book persuaded me to clarify my thoughts. He makes a strong argument that some aspects of revolutions are inherently unpredictable, but I'm still trying to decide whether he succeeds in refuting alternative theories that imply factors such as sudden declines in wealth can help predict revolutions.
Comment |
Was this review helpful to you?
Yes
No
2 of 3 people found the following review helpful
5.0 out of 5 stars Fascinating Book September 29, 2003
By Chris O'Leary
Format:Paperback
This is a fascinating, thought-provoking book that discusses with great skill issues like preference falsification, pluralistic ignore, social psychology, and related topics. It's a great study of why people too often don't do what they believe. The book is very easy to read and strikes a good balance between being based in research and telling a good story.
Comment |
Was this review helpful to you?
Yes
No
› See all 3 customer reviews (newest first)
Write a customer review
ASIN 0674707583 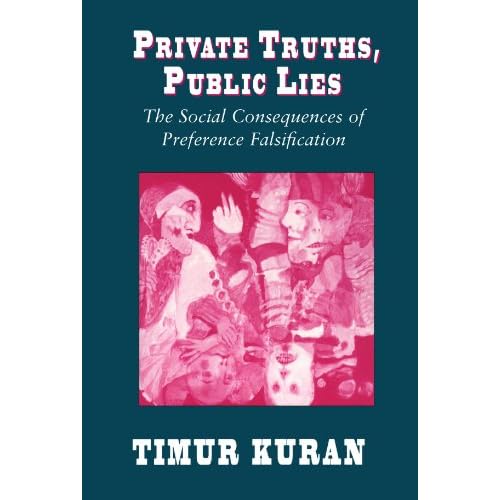 Watch over 25,000 movies and TV episodes

Get fast, free shipping on over 15 million items

What Other Items Do Customers Buy After Viewing This Item?

Sell a Digital Version of This Book in the Kindle Store

Related forums
There are no discussions about this product yet.
Be the first to discuss this product with the community.
Start a Discussion


Look for Similar Items by Category

Your Recent History (What's this?)