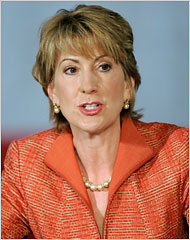 Carly Fiorina, a former chief executive officer of Hewlett Packard, ran as the Republican candidate for Senate in California in 2010, but failed to unseat the incumbent senator, Barbara Boxer, a liberal Democrat.

In the Senate race, Ms. Fiorina moved to the right during a tough, three-way Republican primary. And unlike most successful Republican candidates in the heavily Democratic state, Ms. Fiorina  stayed to the right, in what some political analysts saw as a sustained effort to galvanize the conservative base against Ms. Boxer, a liberal stalwart whom Ms. Fiorina called an “antiwar ideologue” beholden to “extreme environmentalists.”

Republicans — awash in money, emboldened by what they hoped would be a national anti-Democratic surge, and sensing Ms. Boxer’s weaknesses — invested $4.8 million in a last-minute effort to pull the state into the Republican column. Ms. Fiorina, who spent over $5 million of her money in the primary, said she was investing another $1 million in the campaign.

But while Ms. Boxer has never been especially personally popular, her views have been shown to be roughly in line with that of her state. Ms. Fiorina campaigned against abortion rights and in support of off-shore drilling. She told cheering crowds that she would support repeal of Mr. Obama’s health care legislation; Ms. Boxer’s pollster, Mark Mellman, said California may be the only state where the public supports the health care plan.

While Ms. Fiorina pointed to her private sector experience as proof that she would be better able to produce jobs, Ms. Boxer's ads stressed that Ms. Fiorina had been dismissed by Hewlett-Packard -- and highlighted the yacht she bought with her severance package.

Ms. Fiorina gave a condensed version of her professional biography at a Tea Party rally during the primary: a liberal-arts degree from Stanford University that didn't qualify her for anything in particular; an abandoned stab at law school; secretarial work; and then, thanks to a late-blooming focus and a lot of ferocious effort, a dizzying climb up the corporate ladder, culminating in more than five years as the head of Hewlett-Packard.

Ms. Fiorina presented herself as a businesswoman, not a bureaucrat, capable of bringing private-sector savvy to a beleaguered economy.

In the primary, the Senate Republican leader, Mitch McConnell, along with John McCain and a roll call of other prominent Republican Senators, backed Ms. Fiorina, who has widespread name recognition, a Rolodex of affluent friends (and potential donors) and polish at the microphone.

Hewlett's board forced Ms. Fiorina to resign in 2005 after a rocky tenure in which she failed to carry out an ambitious corporate strategy.

Ms. Fiorina's 2005 resignation from Hewlett ended a tumultuous five-and-a-half-year tenure as chief executive. Her charisma and aggressive, top-down leadership style made her a highly visible personality both within the industry and on a broader public stage. But her glamorous profile also made her the target of criticism from Wall Street and company insiders who accused her of neglecting the hands-on management tasks needed to carry out her vision.

Under the terms of her contract, Ms. Fiorina received a severance package worth at least $21.1 million.

During her tenure, which spanned the bursting of the Internet bubble and a slow recovery in technology spending, Hewlett's stock price fell more than 50 percent, a performance far worse than that of I.B.M. or Dell. But within an industry characterized by intense competition and rapidly changing technologies, Ms. Fiorina was certainly not alone in struggling to turn Hewlett into a business success.

Highlights From the Archives

Can the controversial former C.E.O. of Hewlett-Packard become the next Republican senator from California?

Hewlett's Board Forces Chief Out After Rocky Stay

Carleton S. Fiorina was ousted Wednesday as the chief executive of Hewlett-Packard, the giant computer and printer maker.

Bill George, a Harvard business professor, contends that after a decade of turmoil at the company, it is time to split Hewlett-Packard into two businesses: enterprise systems and computer hardware.

Year of the Immigrant

Will the increasing power of the Latino and Asian-American vote lead us toward the elusive goal of immigration reform?

Outsize Severance Continues for Executives, Even After Failed Tenures

Eye-popping severance packages thrive in spite of the measures put in place in the wake of the financial crisis to crack down on excessive pay.

In Whitman and Fiorina, Candidacies That Did Not Compute

The hopefuls from Silicon Valley join a long list of successful technology executives who have proved to be poor candidates for public office.

‘Year of the Woman’ in Politics Falters in 2010

As a result of the midterm elections, the overall number of women in Congress will not increase for the first time in 30 years.

By JESSE McKINLEY; Reporting was contributed by Rebecca Cathcart and Jennifer Medina in Los Angeles; Ian Lovett in Irvine, Calif.; and Malia Wollan in Oakland, Calif

The Democratic incumbent, Barbara Boxer, was declared a winner over Carly Fiorina, a Republican whose résumé included six years as the chief executive of Hewlett-Packard.

The difficulties of Ms. Whitman — and to a lesser extent Ms. Fiorina — are raising questions about money, gender and Americans’ views of candidates who come out of corporate boardrooms.

Candidate for Senate Released From Hospital

Carly Fiorina, the Republican candidate for Senate in California, was released from the hospital on Wednesday, a day after she was admitted for an infection related to breast cancer treatment. Ms. Fiorina will spend the night at her home in Los Altos Hills and is expected to resume a full campaign schedule by Thursday.

By THE NEW YORK TIMES

The Republican nominee for the Senate from California has an infection stemming from reconstructive breast surgery in July.

Barbara Boxer, a Democrat seeking her fourth term as a senator, is locked in the toughest race of her career.

A list of resources from around the Web about Carleton Fiorina as selected by researchers and editors of The New York Times.

"Beyoncé: Life Is but a Dream"

Subscribe to an RSS feed on this topic. What is RSS?

Get Alerts On Carly Fiorina

Receive My Alerts e-mails on topics covered on this page.